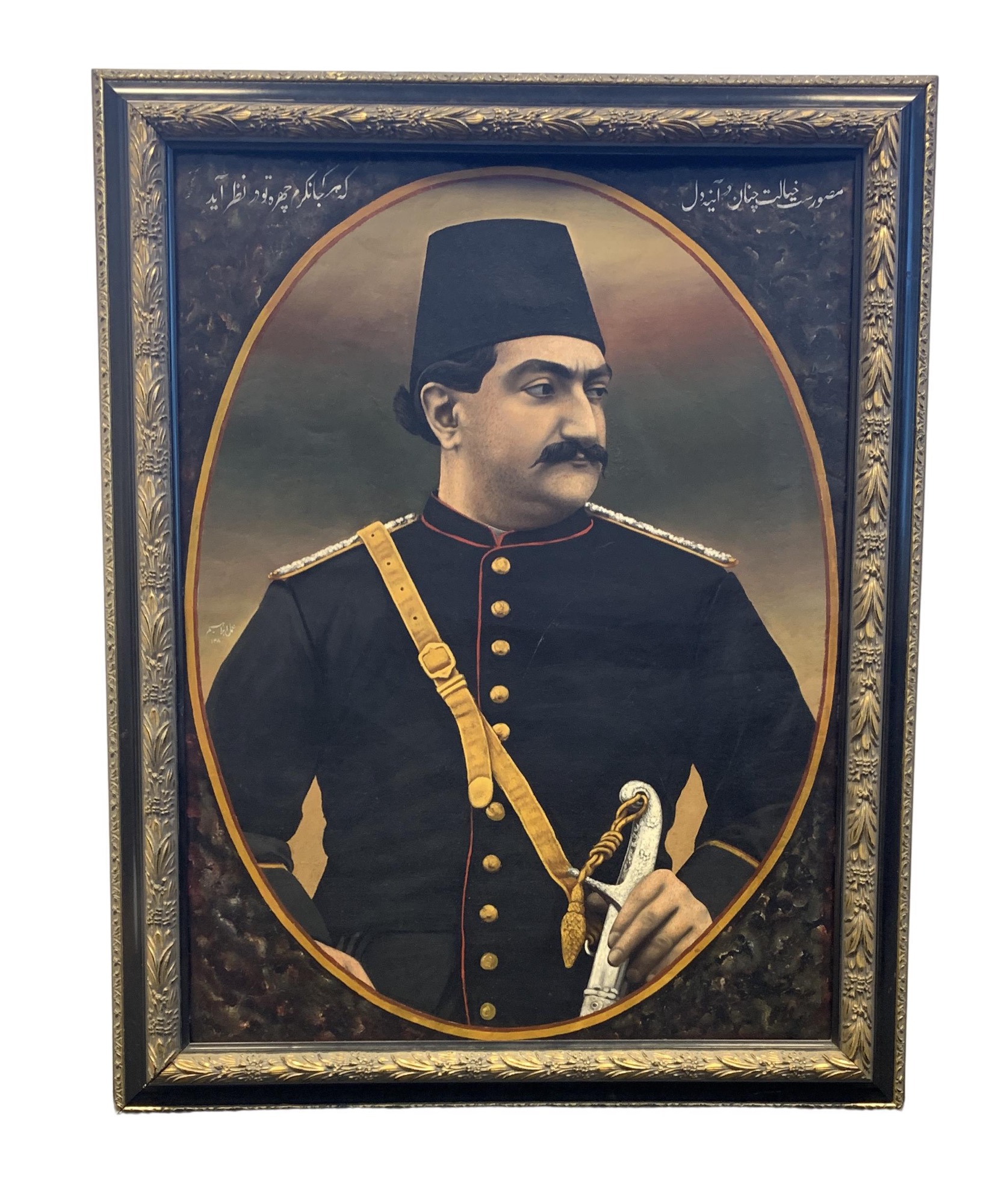 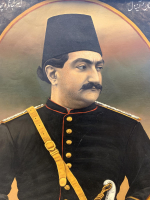 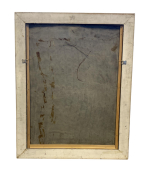 Oil on tin, a painted oval, inscribed with a couplet in nasta'liq script in white at upper left and upper right, signed centre left, the oval against a scumbled ground.

The couplet reads: mussavarast khiyalat chunan dar ayene-ye del keh har koja negaram chehreh-ye to dar nazar ayad: 'Your image in the mirror of my heart is depicted such/That wherever I look, your face comes to my mind'.

Mas'ud Mirza Zill al-Sultan (1850-1918) was the son of Nasir al-Din Shah Qajar, but was barred from the succession (which would be inherited by his brother, Muzaffar al-Din) because his mother was a commoner. He held the post of governor in various provinces of Persia, including Isfahan, where he was renowned for his cruelty and for the destruction of the extant Safavid palaces. He was given the title Yamin al-Dawla Zill al-Sultan in 1869. His powers were later restricted to Isfahan, where he ruled until 1906, when he was forced to resign and left for Europe. Towards the end of his life, he returned to Isfahan, and died there. For further information, see M. Bamdad, Dictionary of National Biography of Iran, 1700-1900, vol. 4, Tehran, 1966, pp. 78-100.

The artist Ibrahim, known as Aqa Ibrahim, who also worked in lacquer, was trained in Russia and often worked in a European style. His recorded works are dated between AH 1290/AD 1873-74) and AH 1330/AD 1911-12. (see Karimzadeh-Tabrizi, The Lives & Art of Old Painters of Iran, vol. 1, London 1985, pp. 12-14.) The painting is closely modelled on a photograph: from the middle of the 19th Century photography was hugely popular in Persia, and the members of the royal household were frequently captured on film by court photographers. (See J. Raby, Qajar Portraits, London 1999, p. 79; and J. Y. Chi (ed.), The Eye of the Shah: Qajar Court Photography and the Persian Past, New York 2015, esp. pp. 34-40 on Zill al-Sultan).

Thank you for your enquiry.

We will get back to you soon.

Are you sure you want to remove "" item from the shopping cart?